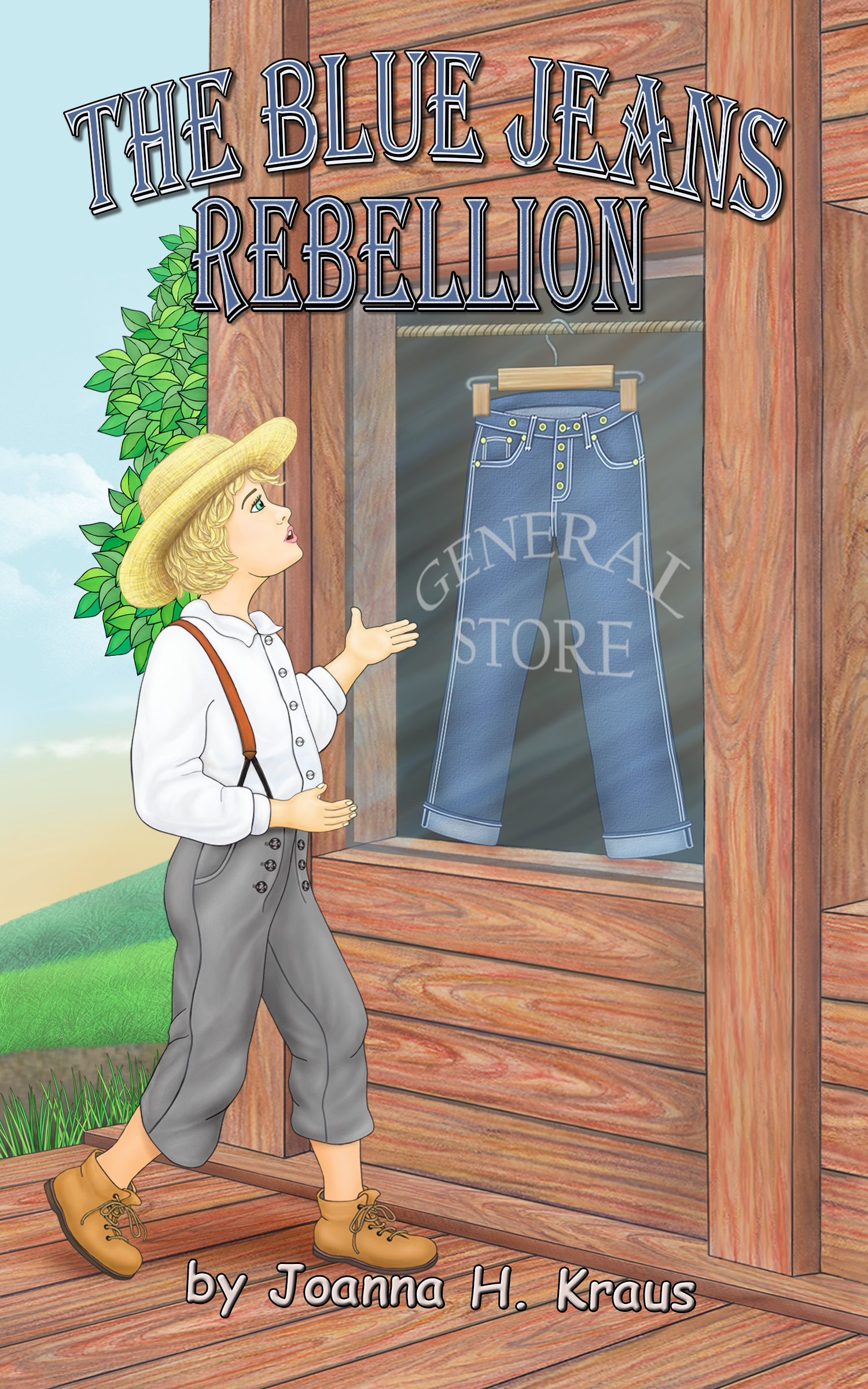 The story is set in 1877 in Orderville, Utah, a planned Mormon community. Many of the families who volunteer to live there had been starving before they came and so they willingly agree to all the rules and regulations. One specifies that until the clothing you wear is worn out you must not apply for anything new.
Eleven-year old Gideon wonders why everyone has to dress in the same drab gray clothes and annoyed that though his pants are too short, his application is denied.
He’d heard about the new transcontinental railroad that went clear across the country. As silver pours from the earth and the railroad flashes its glitter across the continent, brand new products arrive in the west.
One day making a delivery of sheep’s wool to the General Mercantile Store he sees, for the first time, a pair of blue jeans. He knows that he shouldn’t covet them, but that doesn’t stop his overwhelming desire.  Secretly he takes some of the sheep-sheared wool and exchanges it for a pair of store-bought jeans.
When he appears in the doorway in the midst of a square dance, everyone is shocked. His Pa is furious. Mama is in tears. The Board of Management summons Gideon to a meeting.  There he must relinquish the jeans and receive his punishment for taking community property.
But the other boys have now seen the jeans, and they want new pants.  Deliberately they all ruin what they are wearing.
Exasperated, the Board orders bolts of cloth from the nearby cotton mill.  Since there’s an over-abundance of denim, that’s what is sent.
Blue jeans and change come to Orderville.
The Blue Jeans Rebellion, an early reader chapter book, is inspired by a little-known anecdote of Mormon (Latter-day Saint) history.

Perfect for Early or any Elementary Grade Reader. Story may interest those up to age 13 and beyond.

“It is so well written, and is a compelling  story.  You did a wonderful job of inserting the culture of Orderville, and got inside the head of an eleven-year-old boy very convincingly!  It’s a terrific book! Brava!” — Mary Henry Best, Road Scholar Leader and Staff Member

“An exciting read for young readers

The Blue Jeans Rebellion is an educational and page-turning experience for young readers. The book gives a richly detailed, informative, and empathic picture of the Mormon community. The author captures the eleven-year-old protagonist’s courage and sensitivity, as well as the moral dilemma that he confronts and resolves. His resourcefulness and forward-thinking is a model for children who read this book.”

Reviewed for the Association for Mormon Letters

VISIT THE REVIEW ON THE AML SITE

“I honestly was surprised by The Blue Jean Rebellion. I didn’t expect to enjoy it as much as I have. It’s author, Joanna H. Kraus, isn’t LDS and never has been, which was a bonus for me, as I often find insider stories of this type to be treacly, which this was not. It has an older style illustration on the cover, which is nicely done, but might not be quite as attractive to middle-grade readers. It would be well done as a read aloud, however, and the addition of teacher discussion questions at the end of the book for historical context will be a good help to both parents and teachers of readers.

The story speaks to the common problem most of humanity has and seems to reject in some form– at what point is wanting to look nice prideful, and at what point is it functional and good? A young man, tired of wearing the same clothing styles as his grandfather, and even more tired of having grown out of his own pants which are several inches too short, prompting jeers from other children, covets a pair of blue jeans. When presented to a group in this fashion, this problem is instantly recognizable to both elementary and middle school children, and definitely to their parents. Who among us has not wanted something cool we saw in a shop window, or on a person at school? What would we have done to get the coolest jeans in the eighties, nineties, or in 2019? Adding in the idea that blue jeans are a new technology, being a hard-wearing but soft fabric that’s brand new and fancy, with a completely new style of fastening and rivets…the draw is obvious. The problem, however, is not that the jeans are too expensive, or too far away, or even inaccessible fancy tech. The problem is that anything else except what has always been done is forbidden.

This will also be instantly recognizable to children and adults of all ages. Who among us has not wanted to try a new hairstyle, a new fashion trend, or a new idea, because it might be too trendy, too surprising, or too radical. For children to realize that for this young man, wanting a pair of blue jeans would be like getting a bright blue mohawk and skintight leather pants when your family usually dresses very conservatively, I think, will make them giggle, but also think. Seeing the conclusion of the taken-from-life-events story, and the way the boy’s community finds a solution to the problem will make them think even more.

The book is a fast read with large words, a short chapter book. The characterizations are excellent, and in a brief space of time make you feel great empathy for the children, their families, and their concerned community. This book would pair well with conversations about fundamentalism with older children, and with the discussion that similar episodes happen today, only on a much larger scale, in some of our most conservative Mormon-adjacent communities. The idea of shunning is not so far away from our own practices and is among the most dangerous forms of spiritual abuse. I love the resolution of the story, which, although technically Gideon does not get to wear his jeans, he does. Read it to find out what I mean! I hope you enjoy this small treat, which would make a good book for a children’s book club.”

Review of The Blue Jeans Rebellion by Joanna H. Kraus

by Dr. J. D. Newman, an associate professor at Utah Valley University and serves as Director of UVU’s Theatre for Youth and Education (TYE) Center and Chair of UVU’s Department of Theatrical Arts for Stage and Screen.

“I had heard about the historical anecdote, which author Joanna H. Kraus so brilliantly captures in this novella, in my seventh grade Utah History course. As a beta reader for the book, I was delighted to observe how Kraus fleshed out the story and humanized the boy and the society in which he lived. As a member of the religion represented in the book, I appreciate the writer’s even-handed rendering of the characters and her focus on the universal experience of young people confronting the rules that their parents have chosen to follow. The novella, written by a writer from outside of the community it portrays, neither advocates nor denigrates the lifestyle that families like Gideon’s chose to pursue in the late nineteenth century. I recognize the author’s care in accurately portraying the historical characters and the community they inhabited and in making a clear distinction between the lifestyle of families who chose to join communities like Orderville, and those of other Mormon families in the time period. It is a story that can be appreciated and enjoyed by readers young and old, both inside and outside of the community it portrays.
I am impressed by how the author draws Gideon’s conflict with complex strokes and portrays an authentic tension between fulfilling one’s duty to his community and asserting one’s right to think and act differently from those around him. The protagonist is not freed from the consequences of his choices, and while he realizes how his actions might have negatively affected his family’s standing in the community, he accepts the burden of his actions individually.
The glossary and the reflection and discussion questions included in the book help to contextualize most of the details of the story for young readers.
With this latest story, Joanna Kraus has achieved again what she has done so adeptly over sixty years as an author and playwright: identify, illustrate, and dramatize the universal in a young person’s specific circumstances. Her young protagonist exemplifies the critical adolescent process, which Erik Erikson defined in his model of human development, of questioning the world one has inherited, exploring its alternative possibilities, and committing to a more flexible mature perspective. This is a wonderful coming of age story to which readers of different ages and affiliations will readily relate.”

“The Blue Jeans Rebellion, an early reader chapter book, is inspired by a little-known anecdote of Mormon (Latter-day Saint) history. Of special note is the inclusion a Glossary and Discussion Questions for classroom study.

An exceptionally entertaining and original story enhanced with a thought-provoking subtext, “The Blue Jeans Rebellion” is a unique, extraordinary and unreservedly recommended addition to elementary school, middle school, and community library fiction collections for young readers. It should be noted for personal reading lists that “The Blue Jeans Rebellion” is also readily available in a Kindle book format.”

PRODUCT DETAILS: (Buy from the Purchasing Section, below)

Contact us by email for a quote on Library and wholesale prices. We will then send you a PayPal invoice. Do not order from this page.